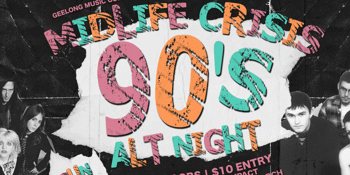 Can you believe the 90s started over 30 years ago? No? Neither can we. This was the decade that shaped so many of us.

From Beastie Boys to Bush, Soundgarden to Silverchair, and Grinspoon to Green Day; this eclectic era had it all.

Journey back to the 90s with us on December 19th!

Get down early!
6pm doors.

All proceeds going to IMPACT at Deakin in support of the Dean McInnes Student Award, helping the next generation of researchers tackle mental health treatment.
The Barwon Club Hotel, Geelong.