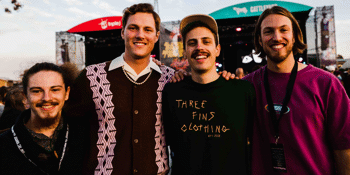 Bedroom producer Jem Pryse is hitting The Barwon Club for his album launch 'SEEK' tour of Victoria.
On the back of His Groovin The Moo appearance, Jem is keen to finally give his loyal and recent fans a performance of his own music that he has been writing while cooped up at home in lockdown.

Within just one month Jem has:

- Released an album 'SEEK'
- Performed at Groovin The Moo
- Triple J Unearthed Artist of the Week
- Reached +1mil Spotify streams for his discography.

Jem's music is largely inspired by soul, jazz and funk and is difficult to fit into one genre. Think a mix of intimate and energetic, sitting down and having a boogie, listening and singing along.

Note from Jem: Hey Geelong crewww, so keen to party with you gremlins! Make sure to get there early to hear Lucy and Maddy carving it up :))