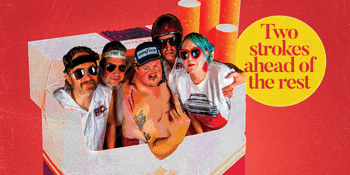 After a 3 year dry spell (we all know them), Grindhouse are back with it’s fourth studio album entitled ‘SEX, PUNK, POWER.’

Recorded in Frankston then mixed and mastered in Los Angeles, California by Steven McDonald (Melvins, OFF!, Red Kross.) It’s 12 tracks of pure punk rock action with the addition of Shannon Cannon aka Candy Cocaine, to bring a new sound to the line up.